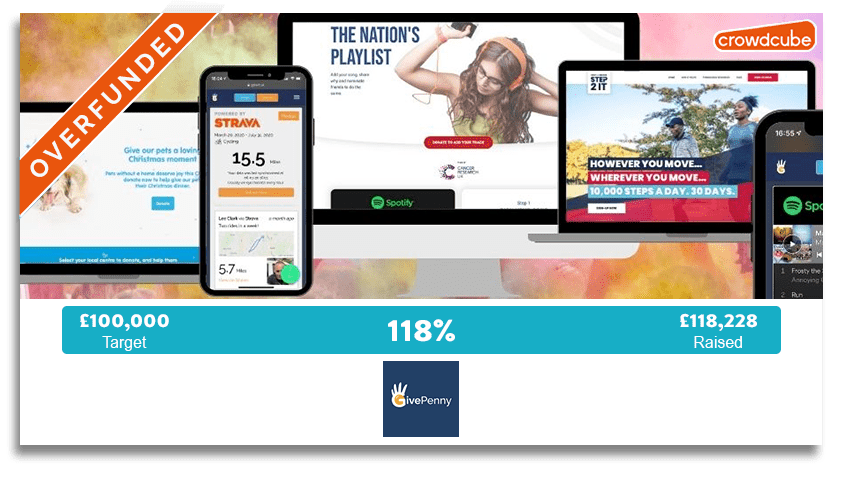 In recent times, charities are facing a common problem when it comes to raising funds for their respective initiatives. GivePenny has created a unique platform which aims to more efficiently connect the world’s most popular apps with charity fundraising challenges, making it easier for good causes to raise more money. We had the pleasure to partner with GivePenny and help them create their fundraising campaign on Crowdcube. The crowdfunding campaign crafted by Drop Studio helped GivePenny hit and then exceed their crowdfunding target, overfunding by 118%. Here’s how Drop Studio helped GivePenny achieve a successful crowdfund on Crowdcube.

GivePenny is a connected digital toolkit for creating effective charity fundraising events. Their customers include the world’s largest research charity, Cancer Research UK. The platform integrates with some of the world’s most popular apps like Twitch, YouTube, Spotify and more, thereby creating a fully integrated fundraising experience.

As a part of our Fundraising Acclerator, GivePenny was given our full support in producing their crowdfunding video. Our creative team understood that there was a need to create a narrative around the film. After sharing the initial film treatments, the final video encapsulated the story of the brand and how the brand wants to position itself as a fully scalable and secure platform.

Alongside the video, the Fundraising Accelerator Program also offered GivePenny our Investor Research, which helped them to grow their network of potential investors in their sector. They also received guidance from our online course and campaign manager alongside our creative support, which helped GivePenny execute a successful crowdfunding campaign on Crowdcube.

GivePenny Crowdfunding – Their journey on Crowdcube

GivePenny hit its crowdfunding target of £100,000 within a few days of launch, and have raised £118,228. With 207 investors onboard, GivePenny was overfunded by 118% towards the end of their campaign.