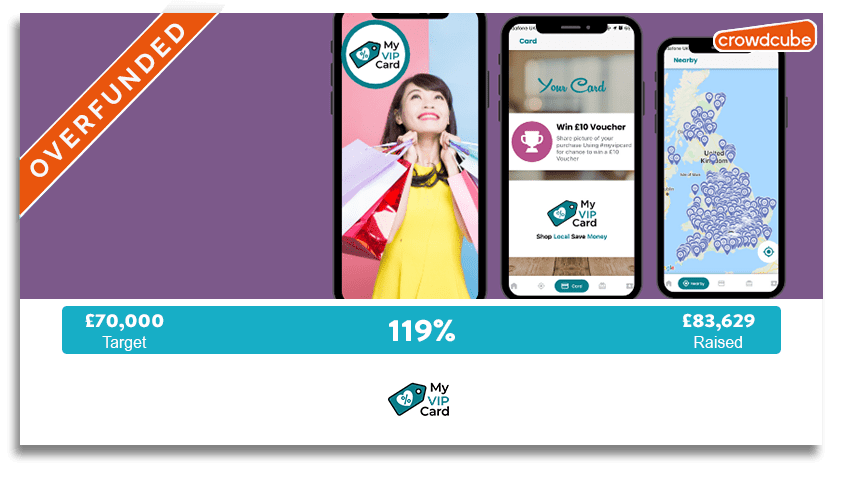 My VIP Card has built an innovative app that aims to reward people when they shop locally. Having won several accolades including Entrepreneurial Spirit for the South East at the Great British Entrepreneur Awards, High Business Growth at the Successful Women Awards, Theo Paphitis SBS and Small Business Saturdays #smallbiz100, the company decided to crowdfund to commercialise & scale-up activities. They chose Drop Studio as their crowdfunding consultants and towards the end of their campaign, My VIP Card’s Crowdcube crowdfunding campaign hit their target by 119%. Here’s their success story.

My VIP Card – The Brand

The UK loyalty market has been growing since 2014 and is estimated to be about £193.6 million in 2020. My VIP Card was introduced in 2017 when founder Maddy Alexander-Grout, came up with a solution aimed at generating more customers for businesses and helping more people connect with their community.

My VIP Card Crowdfunding – How Drop Studio supported them

My VIP Card decided to go with crowdfunding to progress their customer acquisition efforts and thereby promote growth. They chose Drop Studio as their crowdfunding campaign partner to support them with their raise on Crowdcube.

After meeting the team in person, the creatives of Drop Studio understood the mission and vision of My VIP Card. There was a need to create a narrative around the film which demonstrated the importance of the raise. The team focused on creating a video which showcased the brand’s mission through the use of animations and video testimonials of businesses signed up with My VIP Card. Take a look at the video below.

In addition to the crowdfunding video, My VIP Card also signed up for the Fundraising Accelerator Program. The program provided the brand with the tools needed to execute a successful crowdfunding campaign. They also received our Investor Research, which assisted them in finding potential investors.

My VIP Card Crowdfunding – Their journey on Crowdcube

My VIP Card hit their crowdfunding target of £70,000 within a few days of launch, and managed to raise £83,629. With 323 investors onboard, My VIP Card was overfunding by 119% towards the end of their campaign.