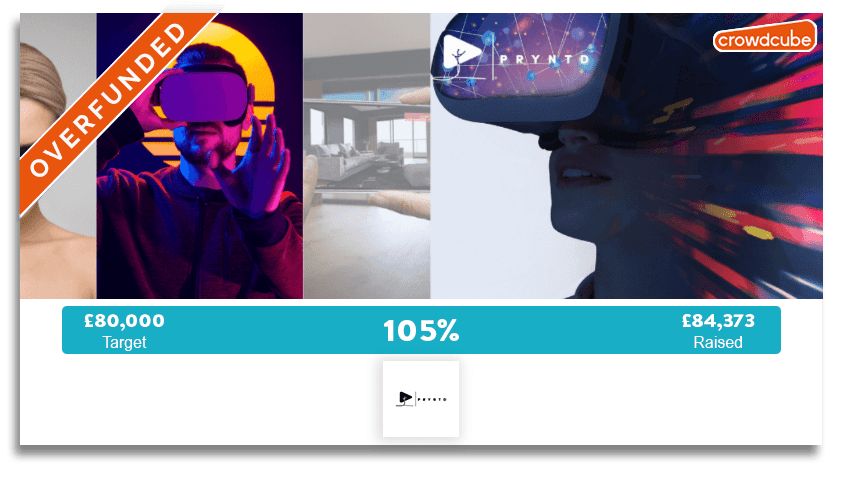 PRYNTD is an immersive content creation and distribution platform for anyone with a story to tell. Users can create, convert, and share 2D content into 360-degree immersive experiences, for mobile, tablet, computer, TV, or Virtual Reality devices. The brand approached us to support their campaign to raise capital, which would help them upscale their platform. With our help, PRYNTD’s Crowdcube campaign has raised £84,373 – overfunding their £80,000 target by 105%! Here’s how Drop Studio helped PRYNTD’s campaign on Crowdcube.

PRYNTD is an AI-driven platform that converts 2D videos and live streams into Augmented Reality (AR) and Virtual Reality (VR). It provides an engaging new way for creators to monetize their content via ads, monthly subscriptions, ticketing, and any merchandise that contains Haptic technology.

Immersive reality is a powerful marketing tool that has to be adaptable for different users. With a total of 200k website views, 100+ Artists, 50+ affiliate partnerships, PRYNTD aims to bridge the gap by providing creators with monetization options, making it possible for audiences to access on-demand, livestreams on their preferred devices.

In order to reach a wide audience, improve technology and maximise exposure for creators, PRYNTD decided to crowdfund their next raise. The brand chose Drop Studio to create their crowdfunding campaign video for Crowdcube. From concept to implementation, our creative team was instrumental in communicating the brand’s vision, mission, and goals. You can watch their crowdfunding campaign video below:

In addition to their crowdfunding video, Drop Studio’s Fundraising Accelerator program provided PRYNTD with the tools and techniques needed to execute a successful crowdfunding campaign. We also provided them with our Investor Research program, which helped them to find lead investors and grow their network.

PRYNTD Crowdfunding – Their journey on Crowdcube

PRYNTD’s crowdfunding campaign on Crowdcube was a complete success! The UK-based brand hit its crowdfunding target of £80,000 within a few days of launch and was successfully overfunding in no time. The brand ended its campaign with the support of 176 investors who pledged a total of £84,373.