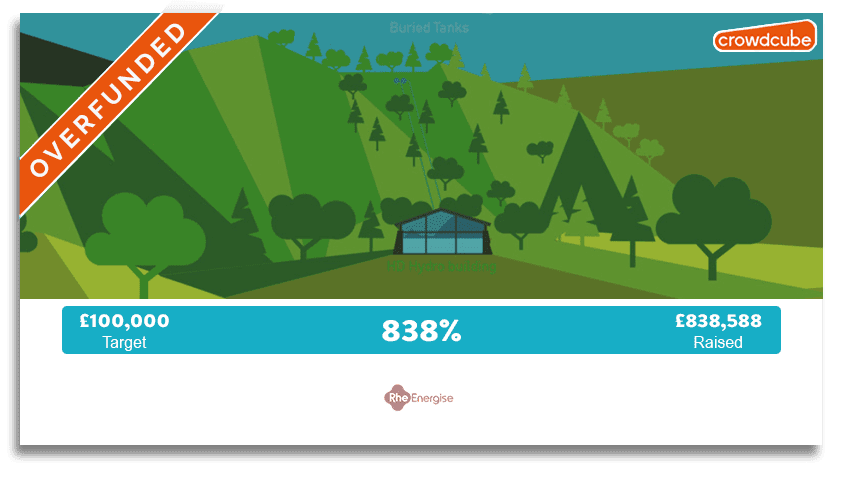 It’s a well known fact that energy storage devices help balance out the demand-supply ratio in today’s energy needs. Energy storage devices range from batteries to thermal and mechanical systems. Such devices accumulate energy produced at one point in time for use at a later time. They are meant to be used to reduce imbalances between energy production and consumption. However not all energy storage systems are the same in terms of cost and environmental impact. RheEnergise addresses this issue with their scalable and cost-effective energy storage solution, known as High-Density Hydro. The team at RheEnergise and Drop Studio came together to create their crowdfunding campaign on Crowdcube. Continue reading to learn more about their success story and how Drop Studio helped RheEnergise smash their Crowdfunding target by a whooping 875%.

BloombergNEF estimates that global energy needs will eventually be 100x more than what’s consumed today. There is an increasing need for energy, especially clean energy to ensure a clean future. Renewable energy like wind, solar and hydro energy  is limited and in order to cater to these increasing demands, there is a need to store this energy.

High-Density Hydro (also known as HD Hydro), by RheEnergise, is a low cost, agile and clean pumped energy storage solution. An HD Hydro equipped project stands out from the rest as they are easy to install on smaller hills, providing 2.5x more power and 2.5x more energy than traditional pumped hydro. They have a predicted life in excess of 60 years, making them a true infrastructure asset.

After winning a prestigious industry innovation award, RheEnergise has a vision is to install multiple HD Hydro projects thus helping to meet the UK’s growing need for energy.

RheEnergise chose to take the crowdfunding route to fund their ambitious project, and take their innovative platform to the next level. The team chose Drop Studio as their crowdfunding consultants to guide them through the process of fundraising on Crowdcube.

Having worked on a similar project in the past, our team knew that we had to create an impactful campaign that would communicate the brand’s mission and their vision to be a leader in the UK’s growing energy market. We created their main crowdfunding video which communicated this message and transformed their idea into film. Take a look at the RheEnergise crowdfunding video below

We also provided the brand with additional marketing deliverables, shorter promotional videos and our signature Essential Investor Research. In addition, the tools provided in our Fundraising Accelerator helped RheEnergise to achieve crowdfunding success on Crowdcube.

RheEnergise Crowdfunding – Their journey on Crowdcube