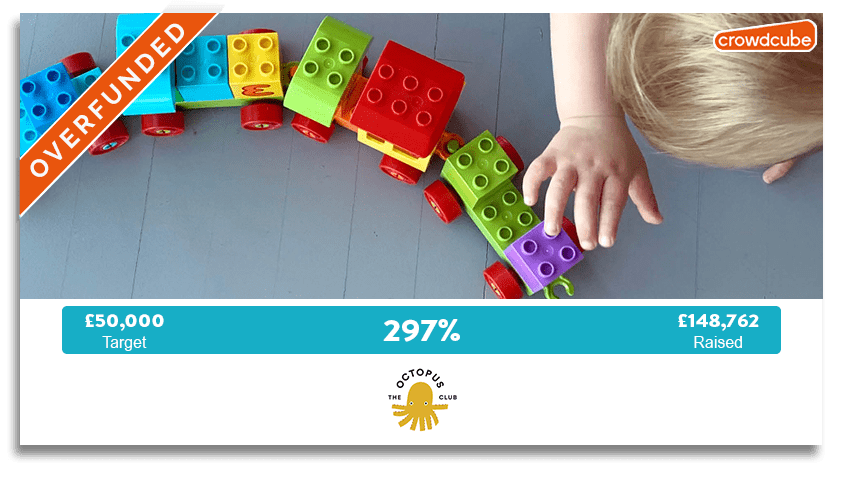 The founder of The Octopus Club has created an innovative marketplace where users can buy, sell or gift anything related to babies & kids. Simultaneously, the marketplace is also a safe platform for parents to extend the life of products and produce less waste. The brand selected crowdfunding to fund their next phase of growth and chose us to spearhead the fundraising process. Having crafted several successful crowdfunding campaigns in the past, our team of experts were well-equipped to support The Octopus Club’s fundraise on Crowdcube. Read more to learn how Drop Studio helped The Octopus Club exceed their fundraising target by 299%.

The Octopus Club – The Brand

Did you know? British parents spend around £1,000 purchasing items before their child is born and in general, first time parents spend at least £3 billion every year on baby items! As a result, these purchasing trends have collectively made the UK baby market £10 billion annually. There is a need to minimise spending on baby items because of their shorter usage time and also the impact they have on the environment due to their manufacturing.

The Octopus Club was born out of this need. The founder, Ana Rachel Estrougo, created this UK marketplace where users can buy, sell or give anything related to babies & kids. Anyone can list and sell items with ease. Members post or get items collected, contact-free, and all payments are processed electronically to keep things simple and secure. Also, the concept of transfer of ownership ensures reasonable spending along with a minimized carbon footprint when it comes to owning baby items.

To fuel their product development and improve their customer service capability, the brand decided to run a crowdfunding campaign with Crowdcube and chose Drop Studio as their crowdfunding consultants.

The Octopus Club Crowdfunding – How Drop Studio supported them

After understanding the brand vision of The Octopus Club, we were determined to craft the perfect campaign for the brand. Our creative team created a crowdfunding video that highlighted The Octopus Club’s vision and its efforts to promote second-hand purchases to support the environment and reduce waste. We produced various film treatments, and the final approved treatment reflected the founder’s narrative and was coupled with animated video elements. Take a look at their video below.

Our Fundraising Accelerator Program also offered The Octopus Club our Investor Research, which helped them to grow their network of potential investors. They also received guidance from our online course and campaign manager alongside our creative support. This in turn helped The Octopus Club execute a successful crowdfunding campaign on Crowdcube.

The Octopus Club Crowdfunding – Their journey on Crowdcube

The Octopus Club hit their crowdfunding target of £50,000 and raised a total of  £149,774. With 292 investors onboard, The Octopus Club had overfunded by 299% as they reached the end of their campaign.